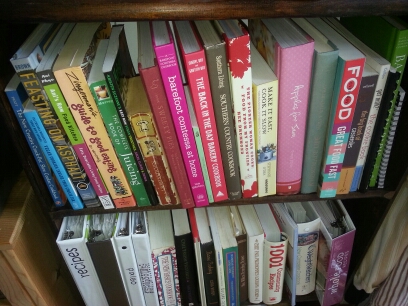 Because I am in decluttering mode, less is more is my motto. This applies to cookbooks and recipes.  I decluttered my cookbooks giving some away to friends and charities.  I had too many.  Some never even opened.  There are some you just don't like. I threw away many recipes I had printed out.  It's been a terrible habit. I'm trying hard not to print so much.  It's overwhelming and it kills trees!  Instead, I already have a set of tried and true recipes that I can make over and over.  What you see above are all the cookbooks I now own.  I will occasionally throw in a new one. The result: I have less cookbooks, less clutter, more order and more calm!

One thought on “Less is more: Cookbooks”